Shopping Cart
Your Cart is Empty
Quantity:
Subtotal
Taxes
Shipping
Total
There was an error with PayPalClick here to try again

Thank you for your business!You should be receiving an order confirmation from Paypal shortly.Exit Shopping Cart

1,400 BC: The first written Word of God: The Ten Commandments delivered to Moses.

500 BC: Completion of All Original Hebrew Manuscripts which make up The 39 Books of the Old Testament.

200 BC: Completion of the Septuagint Greek Manuscripts which contain The 39 Old Testament Books AND 14 Apocrypha Books.

1st Century AD: Completion of All Original Greek Manuscripts which make up The 27 Books of the New Testament.

315 AD: Athenasius, the Bishop of Alexandria, identifies the 27 books of the New Testament which are today recognized as the canon of scripture.

500 AD: Scriptures have been Translated into Over 500 Languages.

600 AD: LATIN was the Only Language Allowed for Scripture.

1384 AD: Wycliffe is the First Person to Produce a (Hand-Written) manuscript Copy of the Complete Bible; All 80 Books.

1455 AD: Gutenberg Invents the Printing Press; Books May Now be mass-Produced Instead of Individually Hand-Written. The First Book Ever Printed is Gutenberg's Bible in Latin.

1568 AD: The Bishops Bible Printed; The Bible of which the King James was a Revision (80 Books).

1609 AD: The Douay Old Testament is added to the Rheims New Testament (of 1582) Making the First Complete English Catholic Bible; Translated from the Latin Vulgate (80 Books).

1611 AD: The King James Bible Printed; Originally with All 80 Books. The Apocrypha was Officially Removed in 1885 Leaving Only 66 Books.

1808 AD: Jane Aitken's Bible (Daughter of Robert Aitken); The First Bible to be Printed by a Woman.

1833 AD: Noah Webster's Bible; After Producing his Famous Dictionary, Webster Printed his Own Revision of the King James Bible.

1846 AD: The Illuminated Bible; The Most Lavishly Illustrated Bible printed in America. A King James Version, with All 80 Books.

1901 AD: The "American Standard Version"; The First Major American Revision of the KJV.

1971 AD: The "New American Standard Bible" (NASB) is Published as a "Modern and Accurate Word for Word English Translation" of the Bible.

1973 AD: The "New International Version" (NIV) is Published as a "Modern and Accurate Phrase for Phrase English Translation" of the Bible.

1982 AD: The "New King James Version" (NKJV) is Published as a "Modern English Version Maintaining the Original Style of the King James." 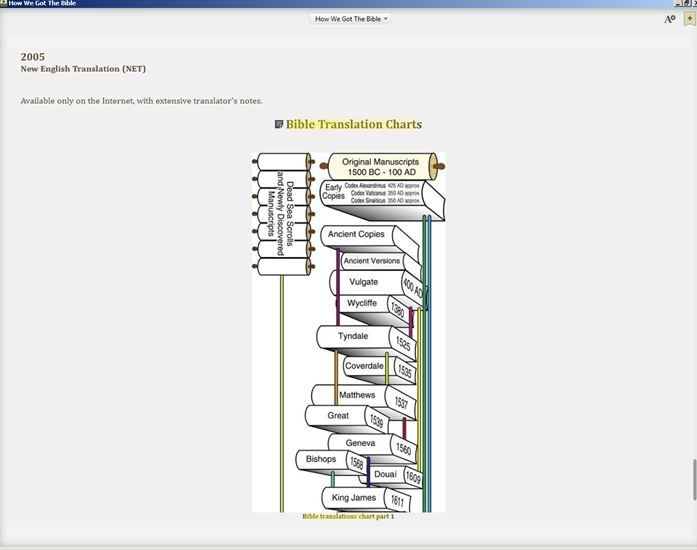 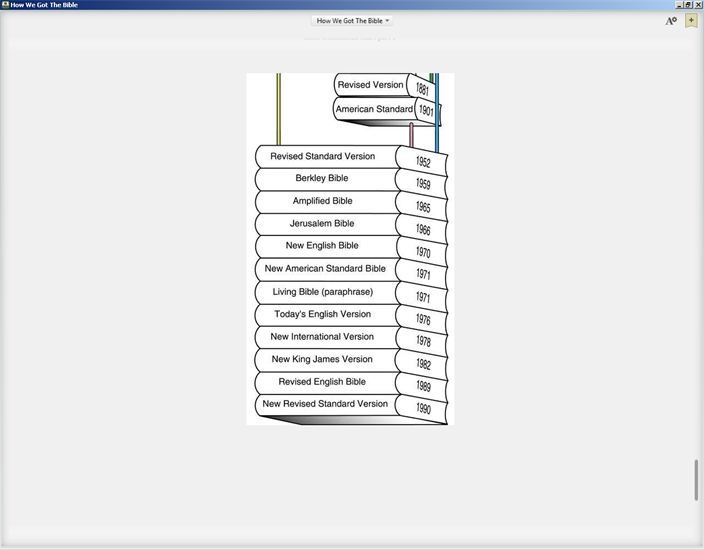